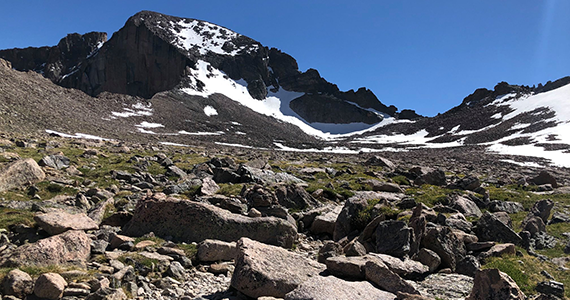 A cool breeze casts itself among the trees as the morning sun begins to peer through the foliage above while the gentle rush of Alpine Brook moves down the bluff with surveyable intent. The sound of nature suffuses with bristling critters as we forego breakfast in lieu of coffee and prepare for the strenuous traipse ahead.

Approaching 11,000 feet we finally emerge from the protected cover of forest into a subalpine zone. The landscape ahead is dominated by long stretches of krummholz sprawled between the trees and tundra heading into the ascent of Mills Moraine and Chasm Lake.  Altitude begins to take toll as we arrive at the junction between lake and summit; 11,540 feet. Breathing hastens and thinned air leads to depleted muscles at an alarming pace. We quickly realize the day has only just begun.

Nearly three miles separate the mass of hikers at the junction from the battle-hardened troops above in the Boulderfields. Halfway from the junction to the campsite one will find the saddle between Lady Washington and Battle Mountain - called Granite Pass - which splits toward either Glacier Gorge or the Boulderfields. Traversing steps of stone quickly becomes a matter of diligence as small rock turns to an enormous cromlech for the not-so-weary.

Looking ahead vast compositions of rock and snow weave throughout the heightened distance with impregnable poise. Behind - an ethereal panorama filled with luscious trees, steadfast earth, momentous skies and intrepid explorers. Prudence becomes innate as we're caught between past and future; solid ground and heavenly aspirations. Marmots with vigilant eyes watch from a near distance as we approach, with a languorous pace and muscular maladies, to establish camp surrounded by our immutable Elysium beneath the stars.