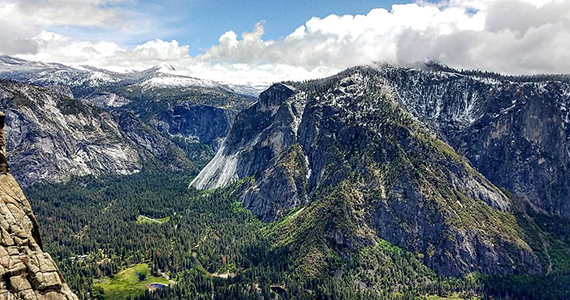 Morning dew blankets the valley floor as we awaken from the night's intolerable conditions. Pools of rainwater ravaged the campsite with enough force to manumit us from our tents well after dark. Temperatures plummeted to a bone chilling 46 degrees Farenheit as near freezing showers encumber the surrounding areas with a discommoding reverence while we migrate rapidly into our nearby vehicle for safety.

By sunrise the assault on Yosemite Valley turned into radiant beams of light as gloom makes way for lustrous hues of blues and greens amongst stately behemoths of granite. Mother nature had waned her ferocity, with as much fervency as she began, creating inspiring depths and degrees of color. Our excitement for the day ahead was just as much a furor of visceral approbation as it was bred through the strength of our morning demitasse.

Beaming rays of sunlight eclipsed the mountainsides and peered into the valley as we approached the trailhead to Upper Yosemite Falls. Looking up into the distance provides a breathtaking array of pines loitered among ridgeline pillows of endless snow. After the intoxicating breadth of early morning caffeine, and with our youthful enthusiasms at full fruition, we began our day-long ascent toward El Capitan.

As we venture upwards toward Yosemite Falls the degree of difficulty mirrors nothing of which touring explorers would have seen before. Monolithic slabs of rock careen round boundless interminable promontories above as formidable cascades form a thunderous roar ahead. Impassable walls of rock bind the ascending ridges, fashioning what feels like a hermetic field, shielding adamant adventurers from the ruthless winds and barrages of mist.

Maintaining steady pace while climbing the nearly 3000 feet - over only 3 miles - is no dastardly feat. Ascending the limitless confidence of Yosemite's illustrious falls bares no mark of surrender while demanding cessation from wayfarers in every direction. One can easily witness the tepid morale worsened only by demonstrable gains in elevation as the mountain's acclivity upgrades its resolve into an arduous 27 degree grade. What were once large strides quickly turn to shuffling feet, scampering up sharp switchbacks, heading toward the summit.

The commanding stature of Yosemite Falls had been eclipsed as we gallantly strolled across the summit toward a magnificence worth lifetimes to behold. The bustling of everyday becomes lost in three thousand feet of rich pulchritude often found only in fairy tales or by the most imaginative visionaries. Overwhelming details of boundless magnitude serve a requital amongst compelling emotions of gratitude as we take refuge within the steadfast boulders lining her summit.

With inconceivable grit, and what seems a most delicious feast, we valiantly muster strength and continue forward. Broad winds atop sheer ridgelines distend the intense foliage heading into what appears an ostensibly calm forest. Specs of slush expose the trail's rim as sunlight turns opaque and the cover of dense woods inundate our surroundings. With every step forward it becomes increasingly clear that the path ahead offers no clarity or precision.

The deafening ascent of Yosemite Falls bares no resemblance to this flattened forest terrain. The boulder-strewn area exists only as a terminal moraine from glaciers and hasn't yet began to melt away. Whatever respite is left in physical relief immediately becomes accompanied by a dizzying strain as the trail dissipates into snow while we march further into the bowels of Eagle's Peak.

We spot two young adventurers making haste in the distance, carrying no sign of water and lethargy on their faces. Short winded conversation concludes that anything further requires significant trail breaking and that these guys had been unquestionably lost attempting their safe return. Disregarding their advice we pushed onward in hopes of finding forward ground where they may have otherwise gone astray.

Within the hour all hope of El Capitan vanishes as the trail disappears and the footsteps guiding our way through the snow all but fade from view. Climbing up and down sharp boulders, through bushes and along winding streams, we begin to realize the sun is setting. Confidence turns to tumult as we about-face with sudden urgency at the harrowing 7 miles back to the valley floor.